I charged my way into Voiceovers

*Disclaimer: Apologies in advance for the double-meaning throughout - I couldn't decide which theme I liked more!

When you think of the word “charged”, what does it conjure up?  Imagery of something running so fast that it can’t be stopped?  A juggernaut, a veritable unstoppable force, despite the immovable object, smashing through it?  A space shuttle upon re-entry, burning up its nose and creating sonic booms in its wake?  Superman, screaming around the planet in a desperate attempt to reverse the earthquake and bring back Lois Lane?

Does it make you think of something that is so powerful, something with such an undeterrable will that it will accomplish its mission without regard for odds?

To charge into something.  Hmm.  What a phrase.  I think of Thor dropping down into the battlefield in Avengers: Infinity War…and how he runs through the crowd and his enemies go flying around him.  I’m reminded of Juggernaut in X-Men.  Once he gets going, there’s no stopping him…at all.  Once he develops momentum, you simply can't stop him. 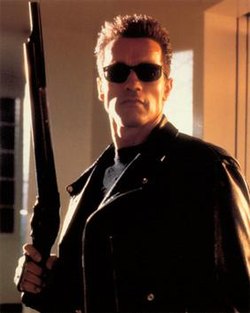 But what I'm MOST reminded of is the lecture that that Kyle Reese gives to Sarah Conner in The Terminator movie:

That Terminator is out there.

It can't be bargained with.  It can’t be reasoned with.

and it absolutely will stop…ever!

Until you are DEAD.

The Terminator had one mission.  He was programmed to kill John Conner, period.  That Terminator charged back through time, charged at Sarah Conner, charged at innocent people caught in the crossfire, and was hellbent on one thing: accomplishing its mission.

That’s how I charged into voiceovers.  Just, um, without the guns.

But, if I strip off my Cyberdyne Systems Model 101 outer shell, revealing my shiny endoskeleton beneath, and I’m super honest with you…

…that’s not the only way I charged into voiceovers.

Mastercard, shut up and take my money Many times, I’m met with the phrase, “I just can’t afford it.”  Or “We don’t have that kind of money.”  And if I’m invited into a place of being able to be dreadfully honest with them, neither did I at the time.  Now, all that to say, are we a family of means?  Yes.  God has been good to us and we can afford lots of different things.  But I do have three mouths to feed in addition to my own, and many times, though the money is coming, it’s simply not arrived yet.  So what happens when I’m in that situation?

I charge my way through it.  Just like the Terminator…except…well, kind of not at all like The Terminator.

There came a point where I needed that mic.  At the time, it was a Neumann TLM102 mic.  And, well, frankly, I also needed:

Funny how that list grew once I started spending.  I had primed a pump.

But I needed it NOW.  I needed to upgrade right now.

The same thing happened when I finally bit the bullet and purchased my $1000 Sennheiser MKH416 mic bundle.  I needed it.  It was time to play with the big boys, and I just couldn't wait anymore.

I had to look at my expenses as investments.  (Read my blog about this).  I had to reframe expenses in my mind as sowing into the future.  I had to perceive them differently.  Yes, I was putting that future-ready microphone on this card now.  Or I was pulling money out of savings to buy this future-ready studio down payment now.  We just purchased a StudioBricks home studio that will be delivered and assembled any day.  That’s an $8000 commitment to upgrade!

Does my belief in my ability and in God's provision exceed my concern over my pocketbook amount?  THAT is where the rubber meets the road.

Dude, don’t be an idiot

Now, it goes without saying, as sweet-naturedly as possible, “dude, don’t be an idiot.”  There’s something to be said for level-headed spending, and knowing beforehand that you even have what it takes to be a juggernaut, to accomplish your own mission, to be your own Terminator.

First, spend $125 for one hour of coaching. And DON’T charge that money.  Spend wisely, get an expert opinion from someone who will give you a Simon Cowell assessment and tell you A) whether or not you actually have it, or, B) if you don’t have it, how you get it.  A coach will help you decide whether or not you continue forward.  I’ll refer everyone until I’m blue in the face, to my coach, Scott Burns.  He’s fantastic.  And he doesn’t care if you have glowing red eyes, a silver endoskeleton and a monotone, cybernetic Austrian accent.  He’ll meld your molten metal and shape you into a warrior….or tell you to jump in the liquid metal because, yeah, you’re done.  He’s that good.

So what is my mission?

My mission is to spend what I need to get, to get where I need to be.  To constantly re-invest in myself.  If I receive a big payment from a voiceover job, is that going into savings?  Probably - at least some of it.  But I’m going to see what areas need improvement.  It's about parting with old equipment and defraying the cost of the new equipment.  It's about upgrading.

It’s a constant game of Grow Castle.  And remember the Pirates game on Facebook? I was HOOKED on this game!

It’s the Crashlands game.  It’s Battlejack.  It’s Skyrim.  It’s everyone’s favorite: Minecraft.  It’s constantly about building, even if that may come at a temporary investment (note: I said investment, not expense), sowing into the future.

Am I advocating debt?  Certainly not.  I’m advocating belief.  After all, I believed that I had what it takes to accomplish my mission, and I was hellbent on accomplishing it from the start, because I had more belief than I had concern.

Except for the notion of someone being DEAD at the end of my mission, I AM the Voiceover Terminator.  It’s my mission, my sole programming, to accomplish what I set out to do, and that’s to be successful in voiceovers.  I can’t be bargained with.  I can’t be reasoned with.  I don’t feel pity at lack of money.  I don’t feel remorse when I hear that someone else doesn’t have the funds, because it’s all in your mind, not your pocketbook.  I don’t feel fear that we’ll be replaced by AI voices, because I’m the Voiceover Terminator, and I absolutely will not stop…ever.

Want more?  SUBSCRIBE to my blog by entering your details in the box, and hitting "Submit."  Share this blog with your friends, and encourage them to subscribe too!

Need a voiceover?  Request a quote today or visit my Demo Reel.  Or subscribe to (or share) my blog.  Or other things.