I’m Joshua Alexander, and I approve this message.

The time has come.

It’s almost that time of year.  I think you know what I’m talking about, and I don’t mean the annual Arctic Tundra Cookoff Sponsored By Jimbob’s Spicy GreaseBurgers. The other thing.  That glorious time where we put off all forms of decorum and civility towards our fellow man, and erupt into fireballs of vomitous political indignation and fury when conversations go south and our dear old dad declares he’s a dirty Democrat.  Or Rachel, our respected realtor, reveals she’s a revolting Republican.

I remember when I was a kid and I always wondered who the other guy was: the other guy who was running, and was neither a Democrat nor Republican.  40 years and tons of education later, I still have absolutely no idea.  It may have been Regis Philbin.

But here comes November, where every four years we gather together as a family, renounce all pledges of lifelong love and commitment, and decide to terminate each other.  Politics gives us such hope for the future, no?  It’s like that plate of warm filet mignon that you were so mouth-wateringly excited about, but ended up tasting like it was made by Satan and charbroiled in sin.

As voiceover artists, we narrate scripts all the time for any type of candidate.  But for some of you, being asked which candidate you’ll vote for is a no-brainer, and you wonder why people ask you such an inane and ridiculous (which means inane) question.  Kind of like the other day when my wife asked me if I minded her purchasing (which means buying) more baby suntan lotion for our sons since she was taking them out to a park on a hot day.  I scratched my head and thought for a brief moment.  Realizing that telling her no would effectively result in having strips of bacon for sons (although bacon IS ridiculously cool, especially in bandages), I advocated for said purchase.  We’re pretty much the same way with politics: most of us have already decided who we’re going to vote for, and that’s President Bacon.  Speaking of, Kevin should really run.  It’s time.  We’d feel six degrees closer to him if he did, that’s for sure (which means certain).

It’s a hard choice!  The candidates aren’t clearly labeled with Autobot and Decepticon symbols for us to easily pick out which one would be best.  We have to guess, and hope that we chose correctly. But just for the record, President Megatron sounds pretty wicked cool.

And now, with Covid-19 spiking again (I know…Covid-what?) there’s talk of major upheaval to the election process this year.  What’s to be done? one might ask.  To which I would answer, “I don’t know.  All I do is read the scripts and eat Satan-steak.”  So when that high-paying political ad comes along that says…cue dark and foreboding voice here:

“In a world where the stakes have never been higher…

your voice CAN make the difference…

Remember that 1985 movie, Brewster’s Millions, starring Richard Pryor and John Candy? Excellent movie. They don’t make ‘em like that anymore. The premise is that Pryor’s character Montgomery Brewster inherits $300M from his great uncle.  But in order to get it, he must spend $30M in thirty days.  He can’t throw it away, he can’t gamble it all away, and he certainly can’t splurge it on research of Japanese Sex Quails.

Welcome back after clicking on that last link!  Don’t deny it.  We now return you to your movie summary already in progress.

Monty Brewster had to account for every penny, and spend it with a purpose, or he would lose his entire inheritance.  At one point late in the movie, after accidentally making a small fortune from investing, he decides to enter politics, because in the Great Instruction Manual of Life, running for office is *cough cough* apparently what you do when you’re *cough cough* finished being a *cough cough* Reality TV show star. So Brewster runs a campaign based on “None of the Above,” to encourage people to vote for no one.  Quite clever, as campaign finance spending usually approaches levels of insidious flamboyance akin to Dennis Rodman’s wardrobe, and he’d be able to squander away a lot of his money with a purpose, whilst ensuring that none of the candidates, all of whom are as desirable as a root canal, actually win the election.

With all that said, I can’t decide.  My choices this year seem to be limited to either President StableGenius or Vice President AdventureDenture.  I can’t hardly even decide on candy before a movie, and I’m expected to vote someone into the office of the POTUS?  I think a committee should be formed at once to discuss limiting my powers, because each time I’m asked by my wife what I’m going to make for dinner, she receives a menu which lists only Top Ramen and Skittles.  Fortunately, I’m only asked to cook every three years and eight months due to my making meals that will surely kill her.

Because of that, I have elected (get it?) to read every single political ad I can be paid for, regardless of party affiliation.  As a voiceover artist, each script I’m awarded is a prized challenge, allowing me to step out of my party rank and familiarize myself with multi syllabic and challenging sociopolitical words such as “the” and “cat.”  I intended to become so familiar with political jargon that it would become impossible for me not to be awarded every political voiceover spot there was.

Then it hit me: I reached a point where I understood that deep within me, I possess vast troves of knowledge and skills, such as:

I came to an epiphany the other day when I was looking up the word epiphany (which means realization).  I realized it meant a “realization of sorts”, and that’s when I realized that epiphany was actually the realization that I had realized.  There will be a quiz later.

This epiphany was that I personally possess exactly what the United States needs to get back on track.  So please look for my campaign manager to start making announcements.  He’s very good, he’s very polished, he’s friendly, children love him, and people would surely vote for me if he endorsed me.  I am proud to present the muppet Elmo as my Campaign Manager.

And hey! As a Voiceover Artist Presidential Candidate…I can record all my own spots!  If there ever was a Heaven on earth, surely this would be it.

So!  With that, I’ve decided to make things much easier on the United States of America by hereby throwing my hat in the ring.  No really.  There it is: that’s my Top Hat lying there in the ring.  I use it only when I run for office, because I can pull cool things out of it, like hanging chads, recounts – and, of course, bacon.

Said in my best Presidential Political Disclaimer Voiceover Voice: “I’m Joshua Alexander, and I approve this message” (which means message). 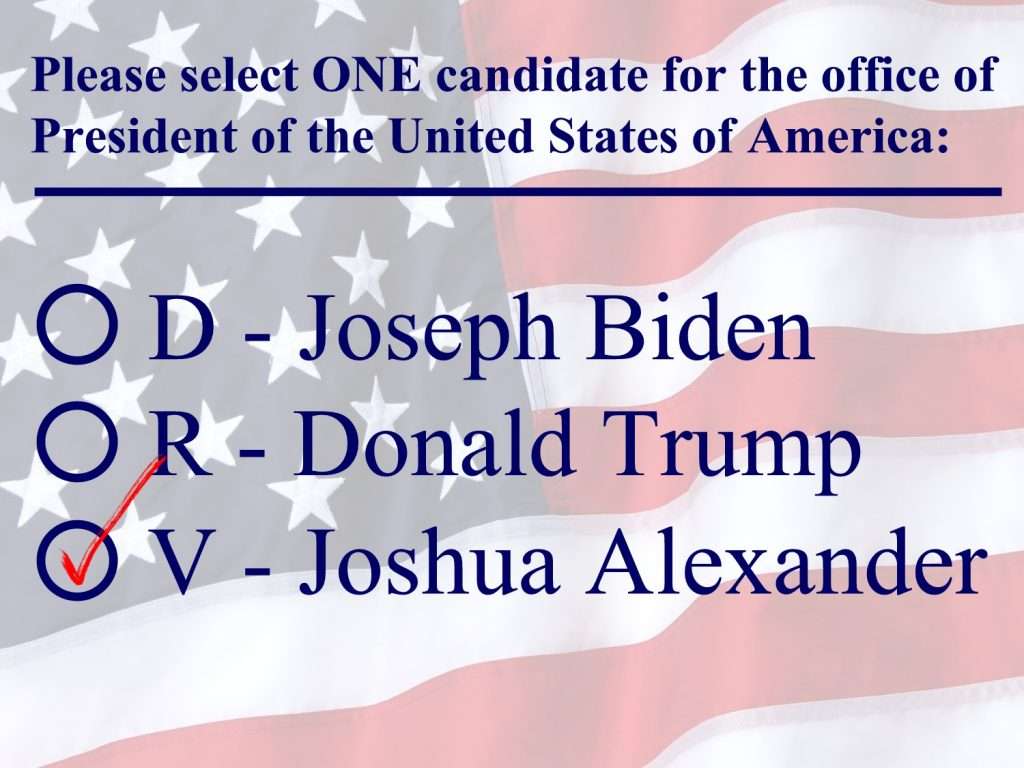 6 thoughts on “That does it. I’m running for President of the United States of America”