The True Story of One Man, a Van…and a life forever changed.  A Hallmark Original.

I once said “Never.”  That is never a good thing to say.  “I’ll never own a van, and you’ll never make me!”  (…and other things once quoted by Joshua Alexander….on sale now wherever quality books are sold).  Indeed, the “Oh no he didn’t” gods were listening in.  They cracked their knuckles, and they went right to work on me.

After recently realizing that my newest son was now the size of a small asteroid, and anywhere we went we now needed the same amount of luggage typically required by a travelling circus, it was time for a change.  Also, we were becoming irritated with the constant badgering from commuters about why we were towing an ocean liner of infant necessities behind us and can we please stop blocking all lanes.

So, on November 27th, 2019, in a stunning turn of events, yours truly became the proud owner of a Honda Odyssey to cart around my growing masses, accumulate French Fries and happy meal toys in the deep dark recesses therein, and constantly load with useless things like double-strollers, diaper bags, snack packs, and…what am I forgetting…something…oh yeah!  My children. 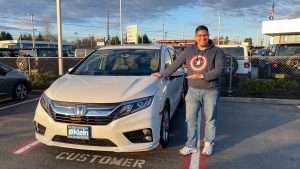 It was inevitable, really, just like a Jonas Brothers reunion.  There’s simply no stopping it, no matter if we bound the Brothers with duct tape, sealed them in a concrete vault full of fire ants, jettisoned the box into space, and shot missiles at it.  It will happen.  They will reunite.  Our van had to happen.

So let this be a lesson to you never to say never. Aside from the fact that if you ever try to use such a word on my 3-year-old you’ll be engulfed in a mushroom cloud of preschool rage the size of Hiroshima, it generally comes back to bite you.  “Never” is a word that you should never say.  Just don’t say it.  Never.

Case in point: I was taking a test drive, and I swore that I would never soil myself.  But I confess I liked that new van so darned much, that it was inevitable.  Once again, “never” came back with very stinky repercussions.

It was now time to buy, and voiceovers would foot the bill.

My wife knew where I was, and she and I had previously agreed on my surrendering my masculinity and buying that minivan.  That still didn’t stop me from fantasizing about visiting the other dealership across the street and surprising her at home with a new Hennessy Twin Turbo Corvette instead.  But I decided I actually liked our bed and preferred to be indoors and not banished, so I made the right decision.  After all, a Corvette does not seat a family of four, at least not comfortably.

So, with the threat of banishment hanging over me, I dutifully proceeded as agreed.  I sat down and talked engagingly with the nice sales rep whose name was Slick McSalesGuy.  Shortly thereafter I was taken down the hall to finance, past a corridor with dimly buzzing, flickering lights and littered with people in tattered garb who were chained to walls with shallow bowls of murky water who had also gone there simply to buy a minivan.  One of them moaned something about the Jonas Brothers.

The finance guy graciously helped me to sign my life, and all future offspring, over to him.  He was a nice man with the last name Stiltskin, but he asked me to call him Rumpel.  If memory serves, I signed three hundred sixty five thousand four hundred twenty-seven legal sized sheets of paper made from the bones of previous buyers, and agreed to language such as “I forthwith hitherto thereunto vis a vis ergo motion in limine concordantly whithershoever bifurcation certiorari habeus corpus nolo contendere peanut butter.”  It may have at some point referenced the Jonas Brothers.

Also I may have soiled myself in the process, which, again, I said I would never do.

Once the dealership had complete claim to my testosterone and legally started addressing me as “Miss,” I drove off the lot in my shiny new gleaming white Soccer Mom-mobile.  This 2020 Honda Odyssey was truly a magnificent beast, with tons of storage space in the back – I was even able to load the entire wheelbarrow with the forty-seven pounds of paperwork I had just signed!  There was simply no stopping me now.

This thing had the best stuff:

The greatest thing?  I actually can record voiceovers in there.  Yeah!  It’s a mobile studio, for sure.  Ah, voiceovers.  You have truly blessed me by allowing me to purchase the car of someone else’s - probably a soccer mom’s - dreams.  I would never have needed such a vehicle had we simply made good choices and just got a vasectomy right after the wedding reception like everyone else with Corvettes does.  But doggonit, kids were fated to come, and so, as the famous hymn says, “Yo-ho, yo-ho, a Voiceover Soccer Mom’s life for me.”

I drove away wondering what I had just signed, and I think I soiled myself.

Someday we’ll be buying a new house with our voiceover money.  I hear it comes with a free Jonas Brothers CD.  What could go wrong, right?

Subscribe to my new Blog site, "The Voices In My Head Blog" - it's the right thing to do!